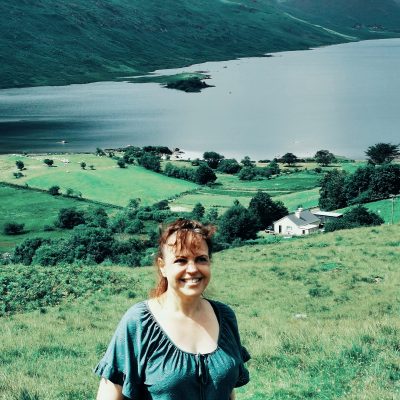 Originally from New England on the US east coast, Hilary grew up in Rhode Island, went to college in Western Massachusetts (Smith College in Northampton), and then on to live and work around Boston and Salem. She had the opportunity to visit Ireland, Britain, Norway, and Canada as well as other parts of the States through those years.  Trading one Atlantic coast for another, she moved to Galway with her Irish husband and first child more than a decade ago.

Having spent childhood summers in the wild woods of New England and winters reading historical fiction and fantasy novels, Hilary found she loved finding out how history, landscape, and culture interact. She earned her degree from Smith in Medieval Studies, with a focus on north-western Europe, spending a year at the University of Edinburgh. Carrying on her interest in cultural heritage, she later earned a degree in Irish Heritage Studies at the Galway-Mayo Institute of Technology (now Atlantic Technological University), taking in literature, local histories, archaeology, folklore, myth and all other aspects of cultural heritage. Hilary was drawn to Hillwalk Tours by the variety of tours they offer and the depth and breadth of the experience they create.

When she’s not working, she is spending time with her family, reading, writing, doing something arty like sketching or calligraphy, and exploring – either in the archives or the great outdoors.