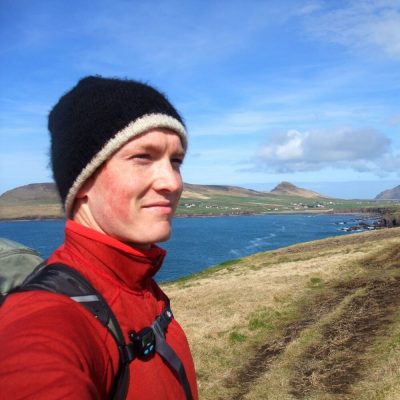 James set up Hillwalk Tours (then Hillwalk Ireland) in 2008. He comes from a farming background and grew up in Kilkenny in the South-East of Ireland. After studying Business and French in university, he spent nine months in Quebec teaching English. After this, he returned to Galway to pursue a career in journalism. This ended when he found that using his press pass to gain free entry to sports events was more enjoyable than writing about them. Taking this into account, James saved up some money, hit the road again and spent a year travelling in South America, New Zealand and South-East Asia. This trip reignited a dormant passion for travelling and for the great outdoors; Hillwalk Tours followed soon after.

As founder, James has performed pretty much every role within Hillwalk Tours. Initially, he walked all the trails and visited each of the B&Bs at which our customers would be staying. After that, his role became more office based as he focussed on designing the website and making bookings for the walking trips. As Hillwalk Tours grew, his priorities changed and building a team of people who were (and are) equally passionate about providing great travel experiences was his next challenge. Now that this team is in place, James’ primary role these days is to keep out of their way and let them get on with the great work that they do.

With the arrival of his first child in 2018, James’ main interests outside work have changed somewhat. He now spends less time playing sports and more time splashing in puddles. Less time going out for food, more time picking food up off the floor. And the ceiling. And the walls. You get the picture. (He loves it really).