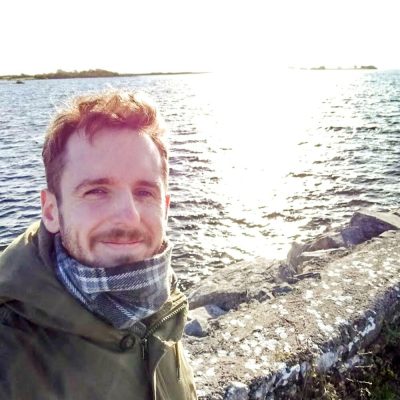 Jamie grew up in a County Galway town in a family with a love of international cultures, travel and languages. His mother is an Italian speaker who lived in Italy for many years, his cousins grew up in Zambia and Bolivia, and his grandmother traces her roots to the city of Lima in Peru. This gave him a curious interest in life beyond the familiar from an early age. The day after graduating from university in Ireland, he moved to London to develop his career in communications and marketing and lived there for 6 years, working in the education and health sectors. Before joining Hillwalk Tours, he led the marketing strategy for a world-renowned association of international schools where he had the exciting opportunity to visit schools in diverse areas of the world.

As Marketing Manager, Jamie is always looking for new ways to share compelling hiking stories from our trails in Ireland, England, Scotland and Spain. He has been interested in using digital technology to communicate since he was young and believes technology as a communication tool has developed at a remarkable pace. He still remembers his first mobile phone which allowed only capital letters to be used in sending text messages!

A keen musician who has performed and recorded in both the UK and Ireland, you’re likely to find Jamie singing songs in the corner of a local pub at the weekend. He also runs a supporters’ club for English-speaking fans of the Argentinian football team Newell’s Old Boys and from time to time, he translates Spanish content into English for the Rosario-based club. When it comes to football though, his first love is Tottenham Hotspur. He still holds a season ticket at Spurs and travels back to London regularly to see them.

Any cookies that may not be particularly necessary for the website to function and is used specifically to collect user personal data via analytics, ads, other embedded contents are termed as non-necessary cookies. It is mandatory to procure user consent prior to running these cookies on your website.