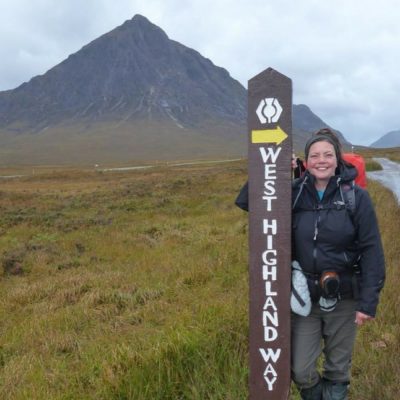 Misja Weesjes was born in the Netherlands and moved to Ireland when she was 13. She spent the remainder of her childhood between the two countries, spending summers camping in the Netherlands and Europe with her father and brothers, and the rest of the year running wild in Galway. At 18 she moved back to the Netherlands for a year to study hospitality, but the lure of both her family and the wild open spaces of the West of Ireland, proved too much and she moved back to Galway which has been her home since. Misja studied English and Philosophy at the university in Galway, did a post-graduate degree in Writing and then worked in various jobs while raising her family. She was looking for a new challenge when a job opening at a locally based tour operator caught her eye…

She now happily works on the Product Team at Hillwalk Tours, creating content and documentation for tours, making improvements and indulging in her love for the outdoors by regularly heading out on the trails, checking route descriptions, accommodations and all the other bits that go into making a Hillwalk Tours tour.

In her spare time, Misja likes to hike, go on adventures big and small and spend more time traveling to all the places in the world she hasn’t been to yet. She is also a writer and a big reader and likes nothing better than finishing off a day’s adventures with a book beside a campfire, and then writing about it.

Any cookies that may not be particularly necessary for the website to function and is used specifically to collect user personal data via analytics, ads, other embedded contents are termed as non-necessary cookies. It is mandatory to procure user consent prior to running these cookies on your website.