Explore Ireland’s largest island! Located on the Wild Atlantic Way, Achill Island is a real hidden gem! Let yourself be charmed by its landscapes of paradise-like beaches, peat bogs and green mountains! This little corner of Ireland has a lot to offer. Are you going to visit Achill Island? Here are 5 absolutely must-do things!

Between History and Culture

The first men arrived on Achill Island over 5,000 years ago. After a strong period of activity in the Neolithic period, the colonization of the island increased during the Stone Age. The island then saw the arrival of Christianity, and later the reign of the legendary pirate queen, Grace O’Malley. Then came the English occupation, the Great Famine, and finally the decline of transhumance and their way of life. An eventful history which has left its mark!

From the twentieth century, Achill Island became an important artistic and literary center. Heinrich Boll, a famous German writer and winner of the Nobel Prize for Literature spent a lot of time there in the 1950s. He described the travels in his book “Irish Journal”. The painter Paul Henry, made famous the spectacular landscapes of Achill through his paintings. The island has attracted many other famous artists and authors over the years such as Desmond Turner and John Healy. Today, Achill’s creative legacy lives on with many local artists and writers.

So with so much history on the island, what are the must do attractions? Find out here.

Achill Island is home to 5 Blue Flag beaches, and Keem Bay is one of them! With its small cove of turquoise waters surrounded by mountains, it is one of the most picturesque bays in Ireland. A must if you are going to visit Achill Island! It is located at the western end of the island. 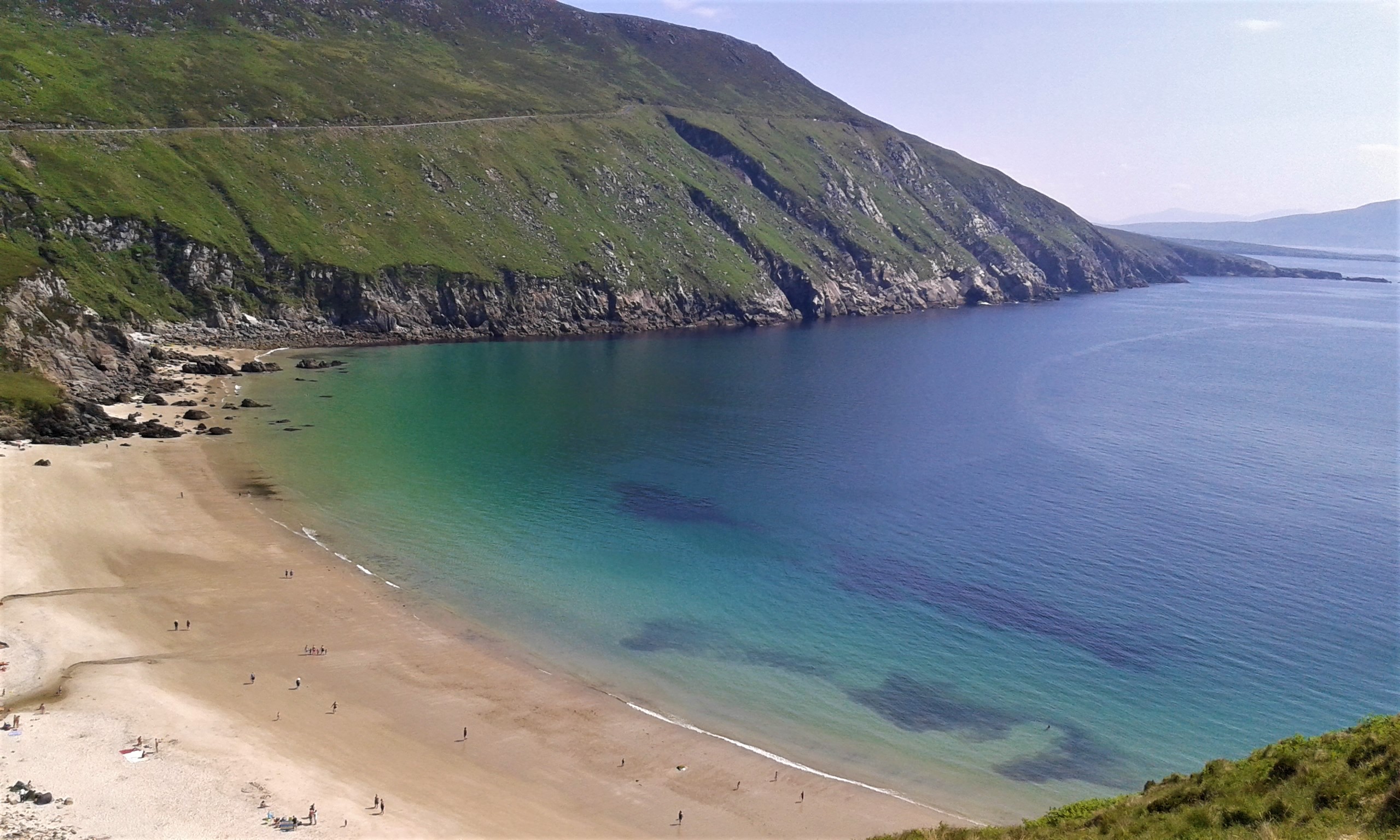 2. Drive through the abandoned village of Slievemore

Located on the southern slope of Mount Slievemore, the village consists of 84 houses in dry stones located along an ancient road.

Visiting Achill Island is about taking the time to discover Irish heritage! The ruins of these dwellings are extremely well preserved. Most houses at the time were only one room. This served as a kitchen, living room, bedroom and even a stable!

The village was inhabited until 1845, when the Great Famine hit Achill Island (and the rest of Ireland). Lacking food, the families then exiled elsewhere on the island, or emigrated.

Even though the village has been abandoned since that time, some families nevertheless continued to use these houses (Booley Houses) until the 1940s, when they took the cattle here during the summer season.

Achill Island has a strong cultural heritage. Historically, artists have been inspired by its beauty. There are still many today exhibiting their work across the island, so do not hesitate to meet them and discover their work!

Liam Kelly is one of them. A native of Achill, he is a passionate artist, in love with his island. He carves bog wood, a wood in the process of fossilization which one finds in peat bogs.

Achill’s bog wood is between 3,000 and 4,000 years old. It is a difficult and capricious raw material, the quality of which varies according to the progress of its fossilization. On Achill, the bog wood is either yew or oak (rarer).

Liam Kelly lets it dry for 1 to 2 years before starting to sculpt it. He works very instinctively, inspired by the natural character of each piece, he uses it to reveal and highlight its own personality. The shapes of his sculptures are so fluid and suttle, that we almost forget that they are wood! His works represent mystical Ireland, history and nature.

This artist is a genuine and talented man. He has exhibited and sold his sculptures in Ireland and around the world. He welcomes you to his studio (Lakefield Gallery Bogwood Sculptures) all year round, so don’t miss out on this visit!

4. Hike to the summit of Croaghaun

Located at the western end of the island, Mont Croaghaun rises to 668m. Its north-eastern facade presents vertiginous cliffs that collapse into the sea.

These make up the highest sea cliffs in Ireland, and can only be seen by climbing on foot from Keem Strand beach. These extraordinary panoramas are therefore a reward that only the bravest will be able to admire!

The hike to the top is quite demanding, especially at the start of the climb which is quite steep. Allow 4 hours for the trip. From the top, you will enjoy incredible views of Saddle Head and even beyond on a clear day.

Croaghaun is also home to 5 proglacial lakes on its slopes. It’s hard to get more wild and grandiose than the landscapes you will discover at the top!

History buffs, to visit Achill Island take the scenic route – the “Atlantic Drive” – which will take you to Kildavnet Castle in the south of the island!

This 15th century tower, 12 meters high, once belonged to the O’Malley clan. This powerful marine dynasty who ruled over Clew Bay and Blacksod Bay, fiercely protect their territory at a time when the domination of Ireland by the Tudors was organized.

Grace O’Malley, the legendary Pirate Queen (also called Granuaile), lived in Kildavnet Castle. A true stronghold overlooking the Achill Strait, the tower also had a strategic position. A significant asset for Grace O’Malley who reigned supreme over the local waters during the second half of the 16th century!

Well-preserved , Kildavnet Castle is an architectural marvel , and the surrounding setting is simply stunning , be sure to stop by!

We hope that you enjoyed this guide to Visit Achill Island – 5 Must-Do Things! If you’re interested in an Ireland hiking tour, just let us know.