The Giants Causeway in 10 Amazing Facts

The Giants Causeway in the far north of Ireland is a legendary place of rare beauty. A UNESCO World Heritage Site since 1986, this ‘Land Bridge of the Giants’ attracts thousands of tourists every year and has inspired world-famous works of art, such as the Led Zeppelin’s album cover for Houses of the Holy.

Time to take a closer look at this special place with our 10 amazing facts about the Giants Causeway. 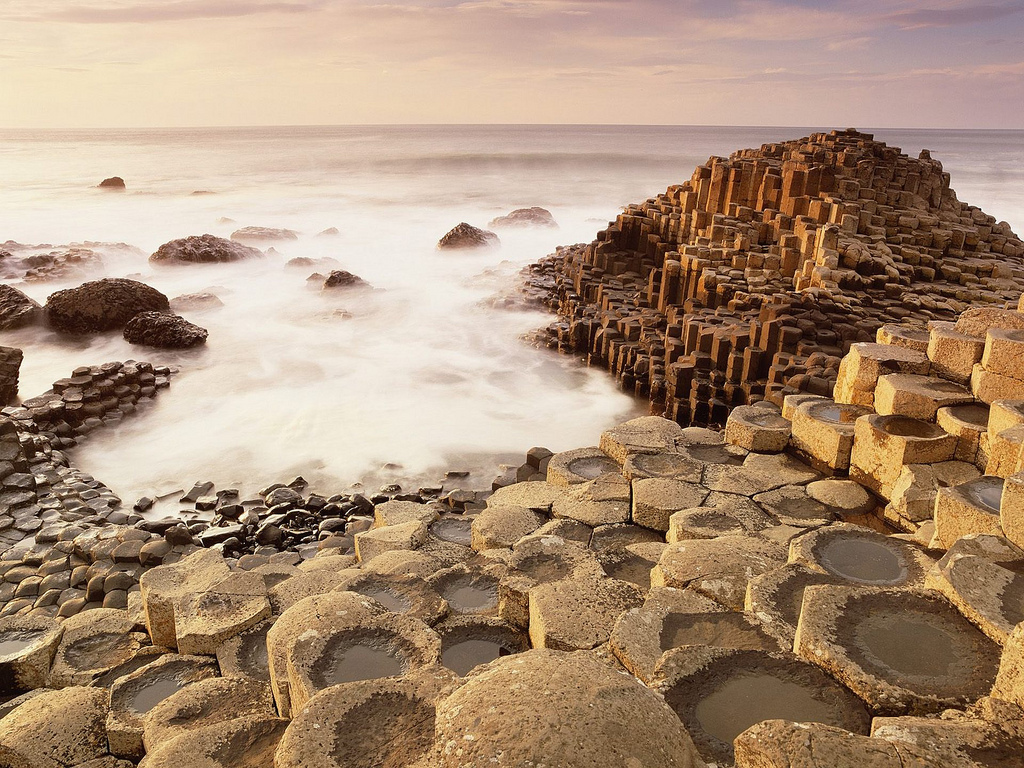 The scientific explanation for the origin of the countless hexagonal basalt columns is as follows. Volcanic eruptions in the Antrim area produced these unique rock formations. The characteristic shape of the basalt columns was created by the very slow and regular cooling of the hot lava.

When it cooled down, the mass contracted and caused stress cracks. These in turn are responsible for the hexagonal shape of the pillars.

The mythological explanation for the creation of the Giants Causeway gave this natural monument its name. The Irish giant Fionn mac Cumhaill (or Finn McCool) wanted to protect Ireland from the Scottish giant Benandonner. So Fionn tore pieces out of the Antrim coast and built a land bridge to Scotland in order to challenge his rival to a duel over the fate of Ireland.

However, when he arrived and saw Benandonner, he realized that defeat was imminent. Benandonner was far bigger and stronger than Fionn. But what he lacked in strength, he made up for in cunning. Fionn decided that the only way to beat Benandonner was to trick him. So leaving the Giants Causeway for Benandonner to find, Fionn’s wife put him in a cradle and pretended Fionn was her baby.

When Benandonner arrived and saw the baby, he quickly turned and fled in shock: if the child was this big, Fionn must be huge! As he retreated across the sea, he tore down the bridge to stop Fionn from following him. What we see today are the remains of the bridge that are left.

The number of basalt columns along the Giants Causeway is approximately 40,000. Most of them are hexagonal, but there are also examples with five, seven, or eight points.

As hair-raising as the legend of the giants may seem, it is surprising that there are still remnants of the Giants Causeway on the Scottish side also. On the coast of the uninhabited island of Staffa is Fingal’s Cave, an 85 meter long cave. It is also lined with the characteristic basalt columns.

Like many of his contemporaries in the 19th century, Felix Mendelssohn visited Bartholdy Fingal’s Cave. This place inspired his orchestral piece The Hebrides.

The cliffs and stone formations around the Giants Causeway provide a valuable habitat for a wide variety of birds. Birds such as cormorants, redshanks, fulmars and eiders nest in the rocks or populate the shallow waters of the coast.

After the British conquered the island of Ireland, the Giants Causeway was first mentioned in British history in the seventeenth century. The Bishop of Derry announced in 1692 that he had “discovered” this impressive natural phenomenon. A year later, Richard Bulkeley, a fellow of the famous Trinity College, published an astonishing article on Giants Causeway.

For many years it was debated whether it was people or nature that had designed the Giants Causeway. Nothing like it had ever been seen at the time.

7. Led Zeppelin’s Houses of the Holy

The award-winning cover of Led Zeppelin’s album  Houses of the Holy  was photographed on the Giants Causeway. Ten days of continuous rain pelted the two golden-blond children who were the models. It is said that this special light contributed to the unearthly atmosphere of the work.

Although the decision to reproduce the children and dye their skin purple by post-processing certainly also played a part in this.

The legendary cover of Houses of the Holy. Photo: Flickr_Ian Burt. License .

Like the giants from Irish and Scottish legend, the volcano that gave birth to the basalt columns can no longer be seen today. It has disappeared from the face of the earth through erosion. As is so often the case, it is the traces of history like the Giants Causeway that point to a bygone world to this day.

Those who are not in a hurry are definitely advised to combine their visit to the Giants Causeway with a hike. You can follow the 162 stone steps of the “Shepherd’s Steps” for a day hike and enjoy a breathtaking view of the basalt columns from above. These are located north of the visitor center.

However, if you want to discover the beautiful Northern Ireland coastline in detail and arrive to the Giants Causeway in a truly unique way, you can hike (sections) of the 1000-kilometer Ulster Way along what is known as the Causeway Coast Way from Ballycastle to Portstewart. Perhaps the most beautiful coastal hiking path in Ireland, this route will also take you to other popular sights, such as Dunluce Castle, Carrick-a-Rede Rope Bridge and various filming locations of the popular TV series Game of Thrones.

Various nicknames have become popular for this unique landscape in front of the cliffs of the Antrim coast. Some of the column formations even have their own names, including “the camel’s humps”, “the organ pipes”, “the harp”, “the chimneys”, the “eyes of the giants” and the “honeycomb.”

A special tip: get up early. The sunrise bathes the Giants Causeway in a magical light. With a little luck you will see how the dawn is reflected on the water in the basalt columns. But even when the sky is gray, the early bird will be rewarded with the feeling of having this enchanting place all to himself. Before the world wakes up.

* Insider tip 2. Visit the many other attractions along the Antrim coast

The Giants Causeway is a special attraction but there is so much more to see and do on the north Antrim Coast that you will really be missing out if you don’t also designate plenty of time to visit them. In addition to the exhilarating Carrack-a-Rede Rope Bridge and historical Dunluce Castle, other highlights include Fair Head, Ballintoy Harbour, The Dark Hedges and the Bushmills Distillery.

We hope that you enjoyed this guide and for more information on hiking the Causeway Coast to the Giants Causeway, just get in touch.