Due to increased demand, it’s taking our team a little longer than usual to book tours. As a result, we can also no longer accept group bookings for 6+ walkers for 2023.
info@hillwalktours.com
Search Our Tours

Top 12 Movies Filmed in Scotland (With Some Surprises!)

Scotland and its beautiful hiking trails are famous for their breathtaking scenery and, not surprisingly, have been used as the location for many well-known movies. A land full of culture, mystery (I’m looking at you, Nessie) and some of the most beautiful landscapes in the world, Scotland is always at the front of location scouts’ minds. Have a read of the article to which movies were set in Scotland, and then see how well you do in the quiz at the end!

Without further ado, here’s some location and film trivia about our Top 12 Films from Scotland.

Harry Potter and his friends regularly passed through the Scottish Highlands as they made their way to and from Hogwarts aboard the Hogwarts Express.

One of the most famous images from these movies is the sight of the train crossing the marvellous Glenfinnan Viaduct. 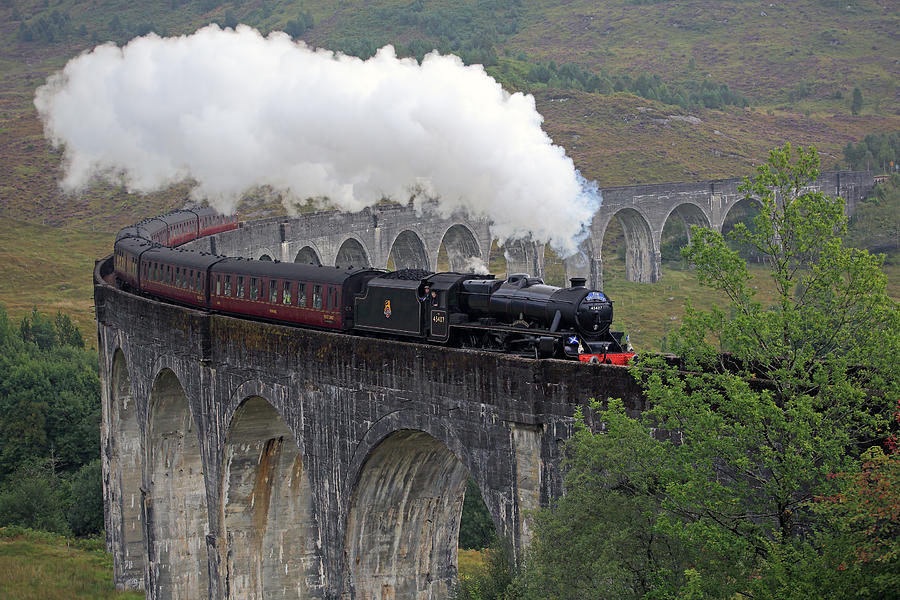 It’s actually possible to follow in Harry’s footsteps on this train.

Hop aboard the Jacobite steam train, which departs each day from Fort William. 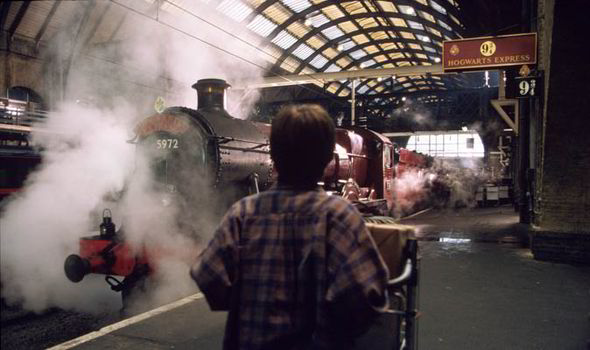 Steall Falls in Glen Nevis is one of the highest waterfalls in Britain, and it can usually be seen in the background of Quidditch matches as Glen Nevis is used as the backdrop to the stadium.

Despite many scenes of Hogwarts being shot in Scotland, the scene in Harry Potter and the Philosopher’s Stone where Harry visits the Restricted Section was actually filmed in Oxford, England.

The Bodleian Library had very strict rules on open flames in their library, but allowed the makers of the Harry Potter movie to be an exception (and they were the first exception in hundreds of years!)

It wasn’t easy, however.

Some parts were filmed in extremely remote parts of the Highlands, leaving cast and crew only one option: travel by helicopter.

Many of the scenes were filmed along the Rob Roy Way, including Megginch Castle, Glen Coe, Glen Nevis and Glen Tarbet.

The Rob Roy Way also crosses the Highland Boundary Fault, a geological fault where the Highlands meet the Lowlands.

This walk takes you through the glens and forests of Scotland, walking beside the rivers and Lochs.

Why not check out our other blog to see who Rob Roy MacGregor really was? 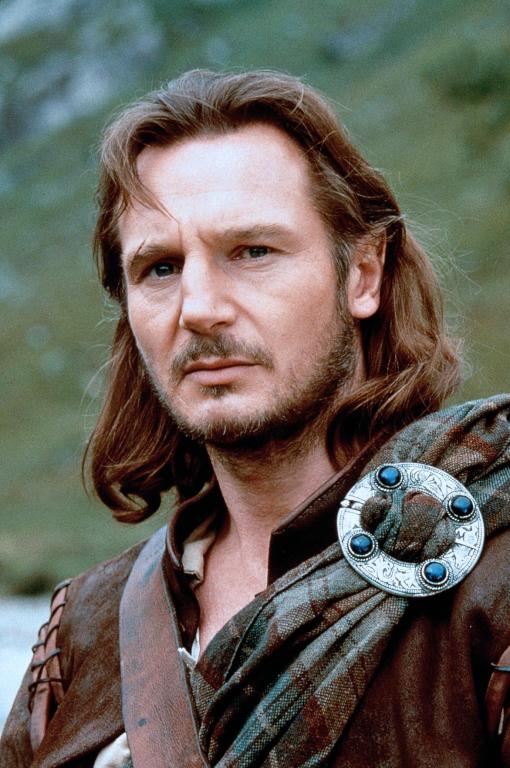 Another great Scottish movie from 1995, this epic starred Mel Gibson as William Wallace.

It was shot around Loch Leven, Glencoe and in the Mamores mountains near Fort William.

All of these locations can be seen along the West Highland Way.

The Mamores are accessible from the village of Kinlocheven, which forms part of our West Highland Way Tour.

Parts of Braveheart were also filmed along the Wicklow Way, one of the tours we offer in Ireland.

An animal welfare organisation actually investigated Mel Gibson on suspicion of animal cruelty over the use of horses in the film.

The fake horses were so convincing they believed he was using real ones.

In order to convince them of their innocence, one of Gibson’s assistants had to provide footage of the location shooting to prove to them the horses were not real.

Although mainly set in urban Edinburgh, parts of ‘Trainspotting’ were filmed on Rannoch Moor, also on the West Highland Way while the start of the Fife Coastal Path is located just outside Edinburgh.

The train station used in the film is Carrour Railway station on the West Highland line near Loch Ossian and Loch Treig. Since the film, the station has been turned into a restaurant.

You can visit for lunch after climbing the Munros.

During post-production, various options were considered to make the film more intelligible for American audiences.

They decided against a subtitled version (as they (the subtitles) would spoil the effect of using them in the disco scene).

Instead, the actors re-recorded the first 20 minutes of dialog, softening their accents so Americans could become accustomed to the Scottish dialect. 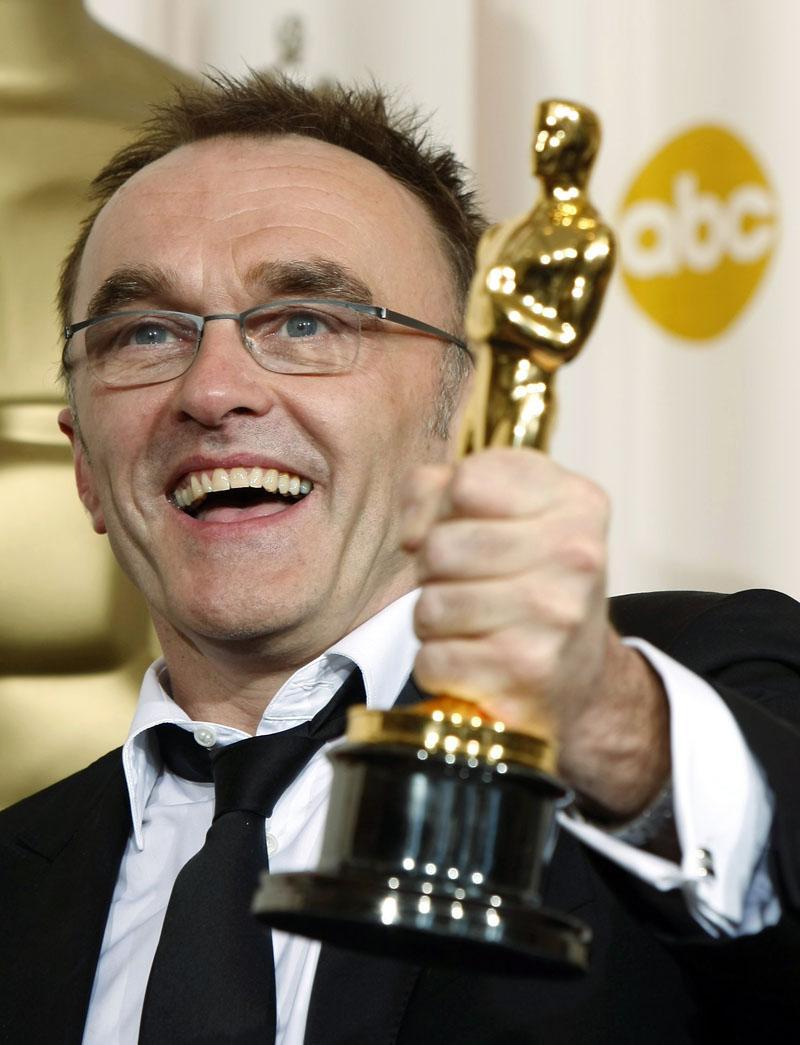 This classic horror movie was filmed mainly on the amazing Isle of Skye which is just a short trip from Fort William.

Culzean Castle in Ayrshire and its grounds were also used for much of the shooting.

The ferry to reach the Arran Coastal Path is in Ayrshire, so walkers can take advantage of the location to explore further. 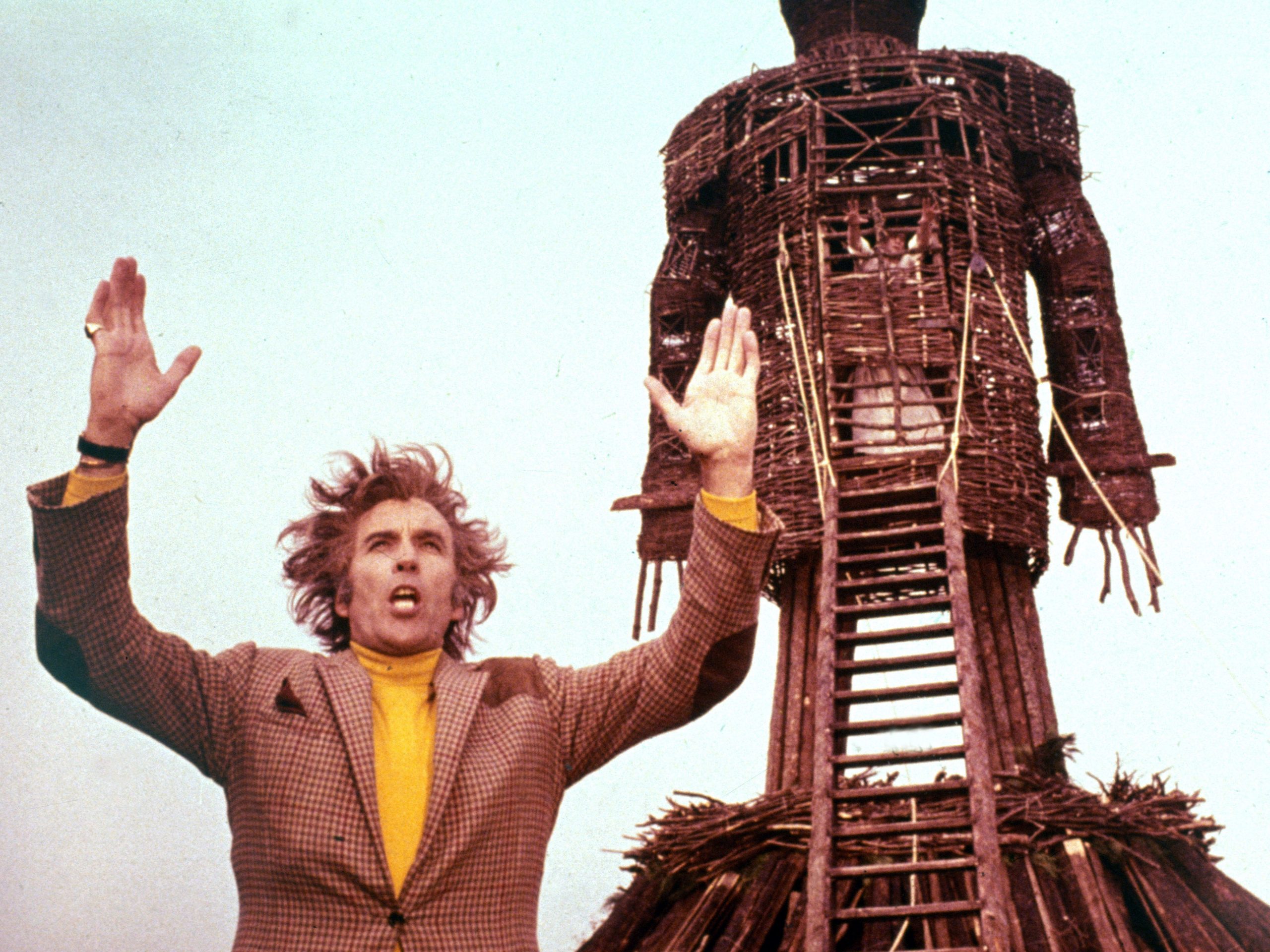 The actual Wicker Man was built (and later burnt) at Burrowhead, on the South West Coast of Scotland.

The stumps remained there for decades and and were frequently visited by fans.

Unfortunately, the stumps were cut down and stolen in 2006 which left fans outraged.

While this is a Disney Pixar animated film, many of the backdrops were inspired by real locations in Scotland and Scottish treasures. The chess set in Merida’s room, for example, is the famous Lewis Chessmen from the 12th century, unearthed in Scotland in 1831.

Urquhart Castle, which can be seen along the Great Glen Way on the shores of Loch Ness, inspired the creators of this film when they visited Scotland for ideas in 2006 and 2007.

The castle is of great historical importance in Scotland and has seen more than its fair share of battles. 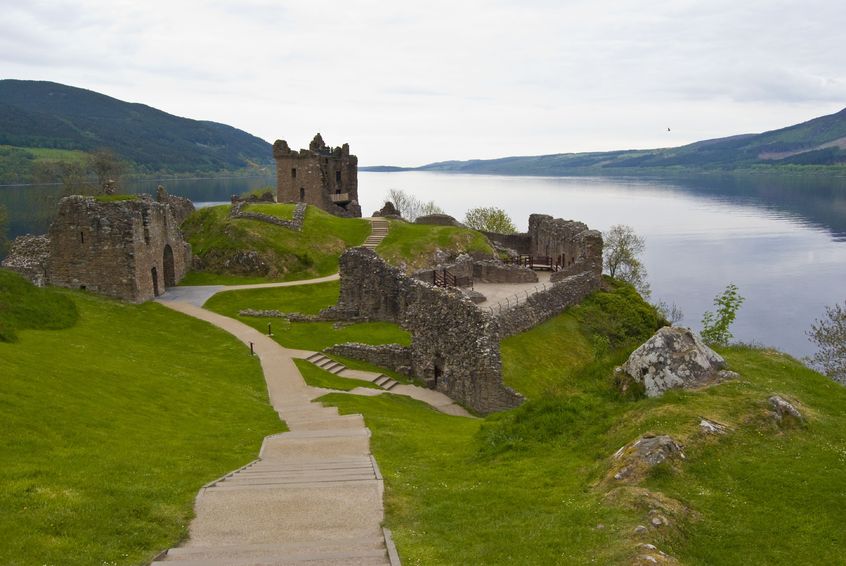 The misunderstood dialect that Young MacGuffin (voiced by Kevin McKidd) speaks is called Doric. It is spoken in northeastern Scotland including in Kevin McKidd’s hometown of Elgin.

In order to simulate Merida’s hair movements in the movie, an additional software programme was created at Pixar to ensure all 1500 strands of her hair moved together with her movements.

There have been many films based on the Shakespearean classic of Hamlet.

The 1990 version saw Dunnottar Castle used as a setting – and it’s easy to see why.

Dramatically perched on a lone hillock, with cliffs peering into the ocean, this ancient fortress was once the home of one of the most powerful families in Scotland, the Earls Marischal. 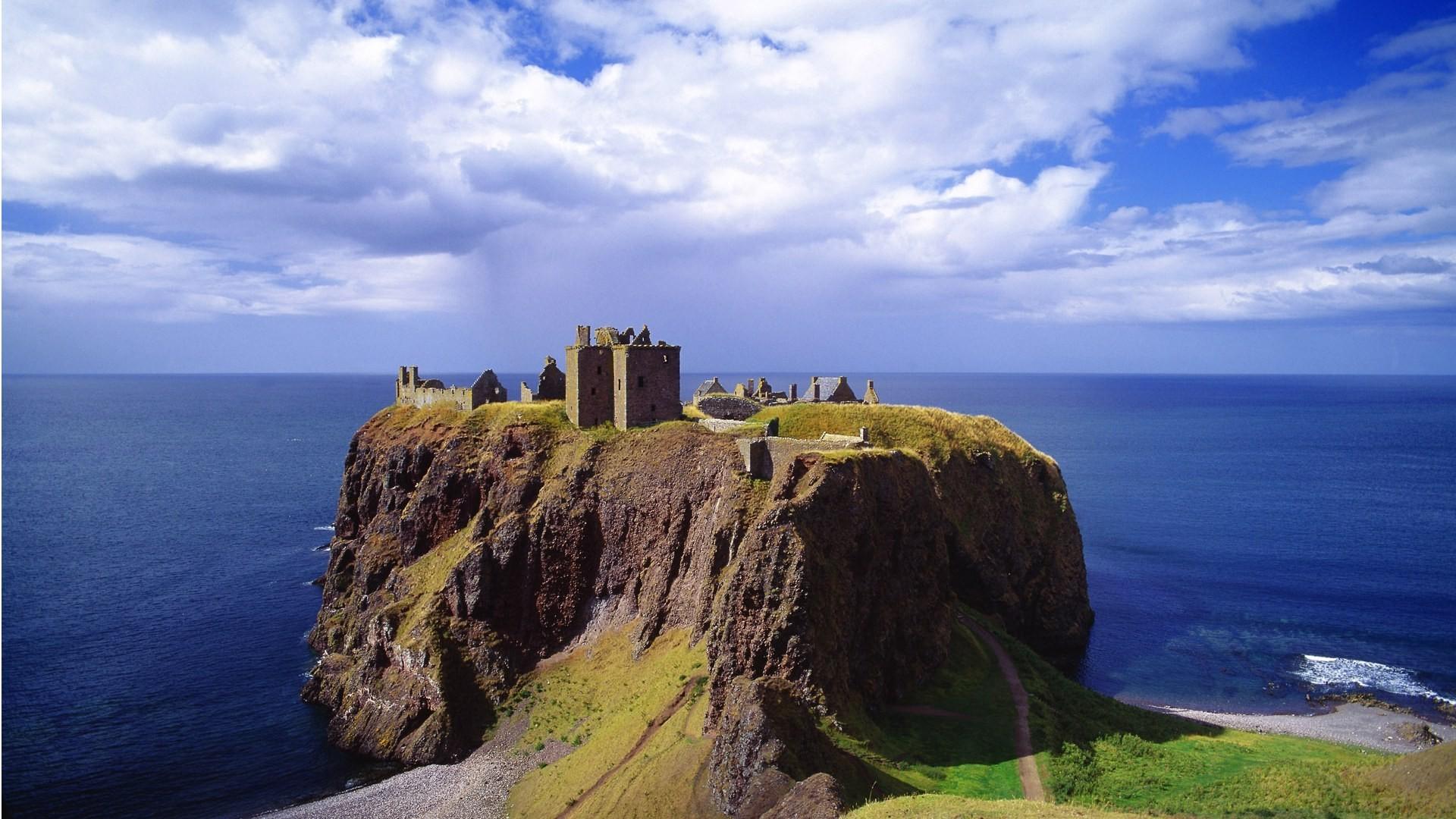 Before this movie, Mel Gibson only had Shakespeare experience in one other Shakespeare play.

It had been an all-male production of Romeo and Juliet in Australia.

He had played Juliet. 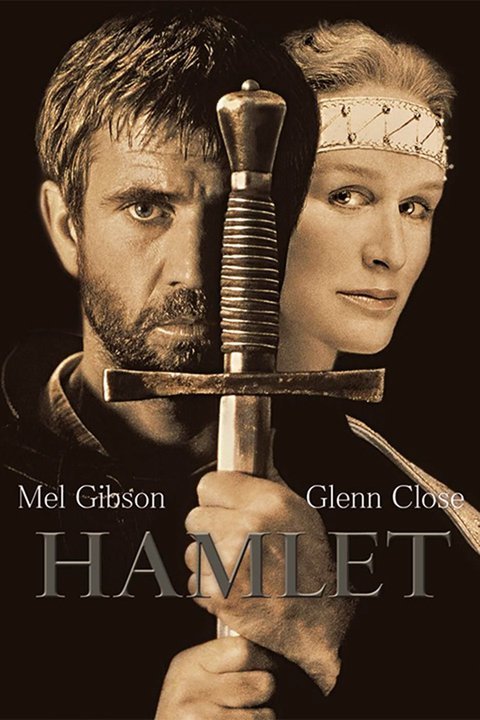 Dunnottar Castle makes another appearance in this re-imagined version of Frankenstein.

Daniel Radcliffe and James McAvoy star in the 2015 adaption, as the castle gets a creepy makeover especially for the film.

Daniel Radcliffe, who plays Igor, opted to wear hair extensions for the role, instead of wearing a wig (growing his own hair would have taken too long).

This meant he had to sport his long locks for the entire time they were filming. 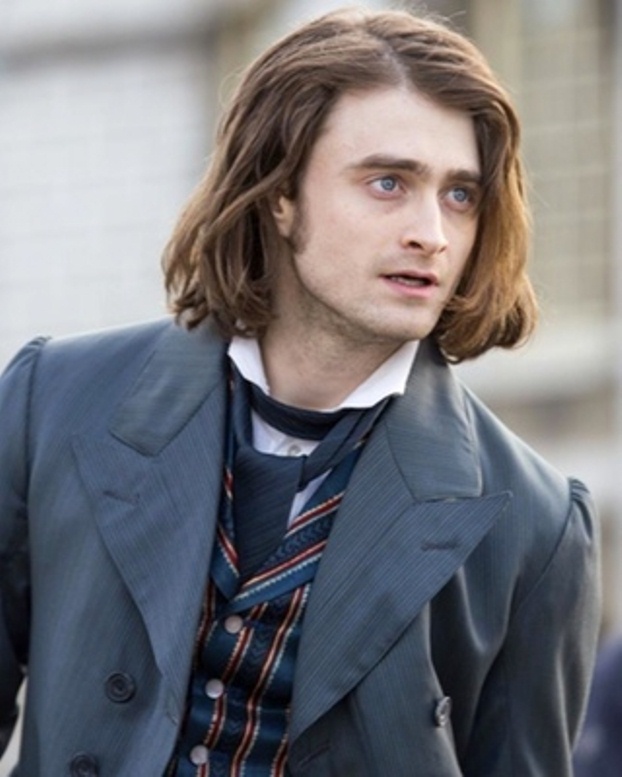 Scotland was used extensively in the filming of Monty Python and the Holy Grail.

Castle Stalker was used as the memorable ‘Castle of Aaarrrrgggghhhh’.

It is perched on an island a short distance offshore and makes for a perfect backdrop for a classically humorous film.

Director Terry Jones watched one of the first screenings of the film in front of a live audience and realised there was considerably less laughter when a joke was made while music was playing.

He decided to edit out the music where the funny parts were and noticed a huge difference in the level of laughter.

From then onwards, he made note to always cut the music when something funny was about to happen.

The Old Man of Storr is probably the most recognisable part of the Isle of Skye.

It certainly fits in with the eerie, other-worldly nature of the film as it truly looks like something from another planet.

It is the most popular and busiest walking route on the Isle, and it is easy to see why. 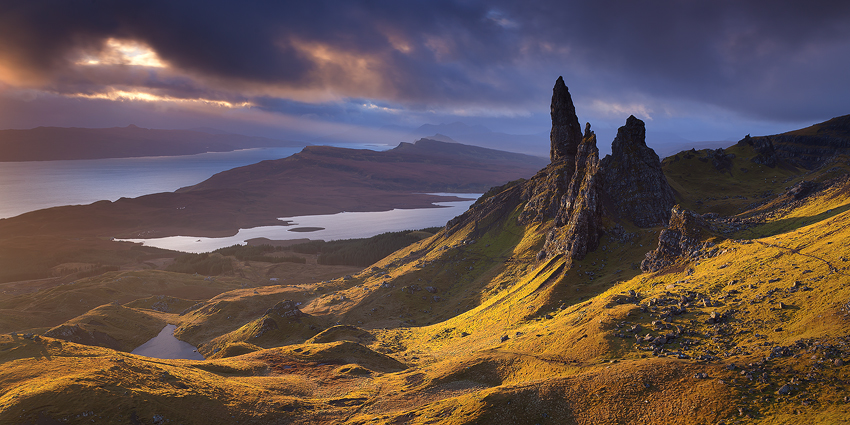 When Shaw is discussing her finds around the world in the conference, the words “Eilean a’ Cheo” can be seen in the background.

This means “The Island of Mist” in Scottish Gaelic, and is a nickname for the Isle of Skye, properly called “An t-Eilean Sgitheanach.”

The film in general has quite an unsettling feel. In order to capture this  feeling, Marc Streitenfeld, the composer, had the orchestra play his compositions backwards.

Afterwards, he digitally reversed the music.

That way, it kept in tone with the unusual nature of the movie.

Fancy getting involved in a mystery that is centuries old?

Take a visit to Rosslyn Chapel in Midlothian, Scotland.

Its Gothic architecture made it the perfect choice as a filming location for The Da Vinci Code.

There is also a gargoyle inside Rosslyn Chapel that is modeled after Ron Howard’s face.

Also, for all you detectives, towards the end of the trailer, the words ‘Seek the Truth’ appear, with the word ‘Seek’ highlighted.

Just after, when the cast names appear, the letters T, H, S, E, C, D, E and O are highlighted.

When you arrange the highlighted word and letters, you can see the phrase ‘SEEK THE CODES’. 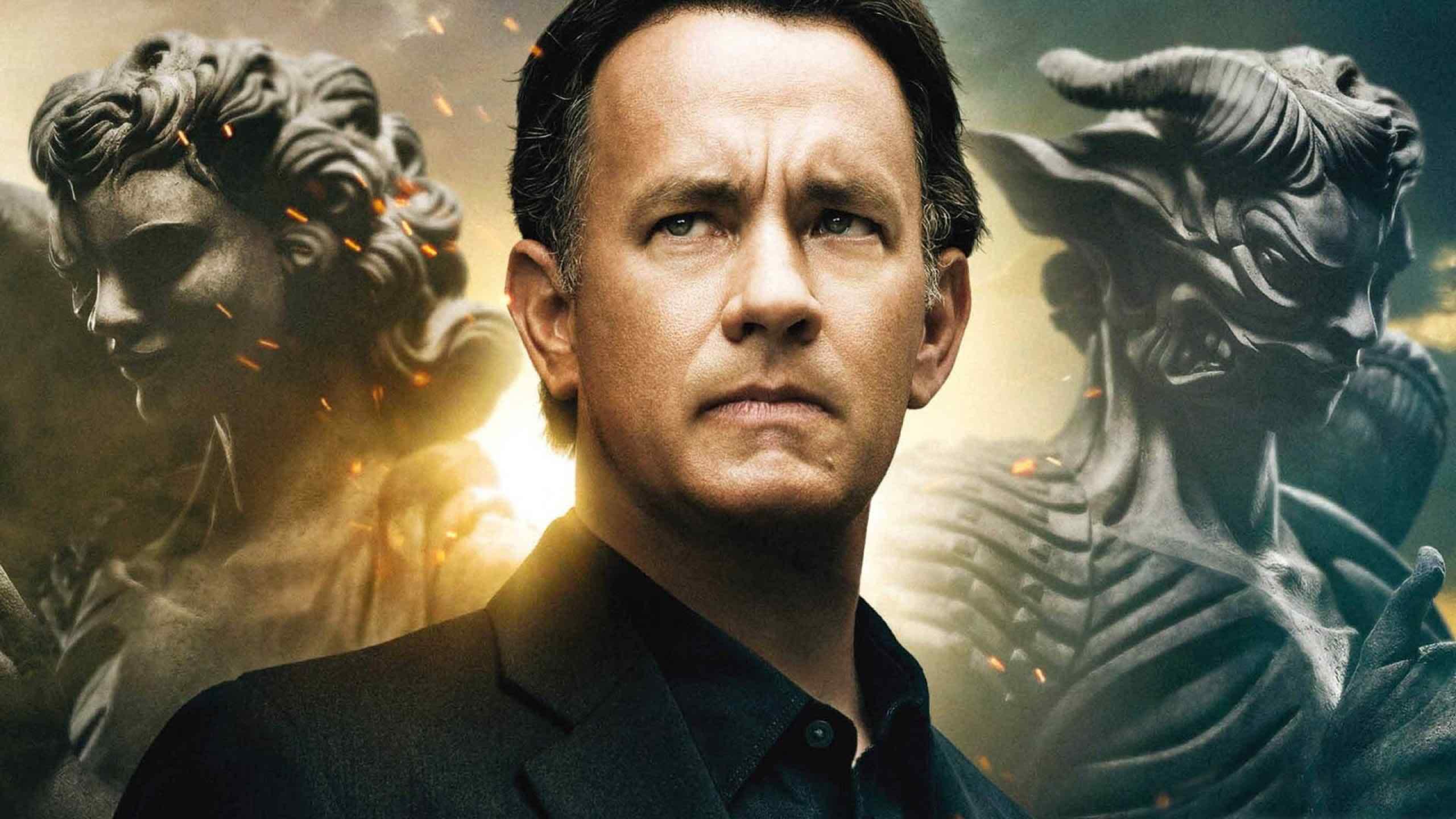 The Quiraing, again on the Isle of Skye, was used during the filming of Snow White and the huntsman.

Its beautiful scenery and dramatic landscapes made it an easy job for the location scout.

The director, Rupert Sanders, didn’t think fake blood looked realistic enough, so the drops at the beginning of the film are real.

Sanders pricked his finger so he could get the realistic shot he wanted.

“Every man dies, not every man truly lives”

With this quote from Braveheart (1995), we encourage you to dive into the Scottish heritage and enjoy the trip – be it in real life or through the movies! These are just some of the highlights of Scotland’s scenery in the history of cinema but do you know any others? Which movie filmed in Scotland is your favourite?

Shout-out to the guys at Itcher for providing some movie trivia!