The 5 Best Hiking Trails in England

England is known for its vast countryside dotted with pristine villages and well-maintained cottages but it’s also home to some of the best hiking trails in western Europe. If you’re a hiker that prefers hills to mountains and beaches to lakes, you’re in the right place. Not to mention the sunnier and drier weather you can expect to get in England compared with its colder and wetter neighbour Scotland. But which hiking trails standout in England? We’ve picked 5 of the best trails in England to help make your decision about your next long-distance hike as easy as 1, 2, 3 (4, 5)!

The Hadrian’s Wall Path is an absolute must-walk for anyone interested in ancient history and heritage, the Roman Empire and hiking. Starting in Wallsend, it runs for 135km (84 miles) to Bowness-on-Solway on the west coast, and it became the 15th National Trail in 2003. Most of the trail follows the ancient ruins of the Roman Empire’s most northern barrier in Europe, named in honour of Emporer Hadrian and built in 122AD. Hadrian’s Wall Path is often considered to be the easiest National Trail in the UK and features only a few climbs. The trail itself is in good condition and would suit walkers who like to trek at an easy pace without any major challenges. The history of the wall itself is long and distinguished and it is said to be George R. R. Martin’s inspiration for ‘The Wall’ in the Game of Thrones series. 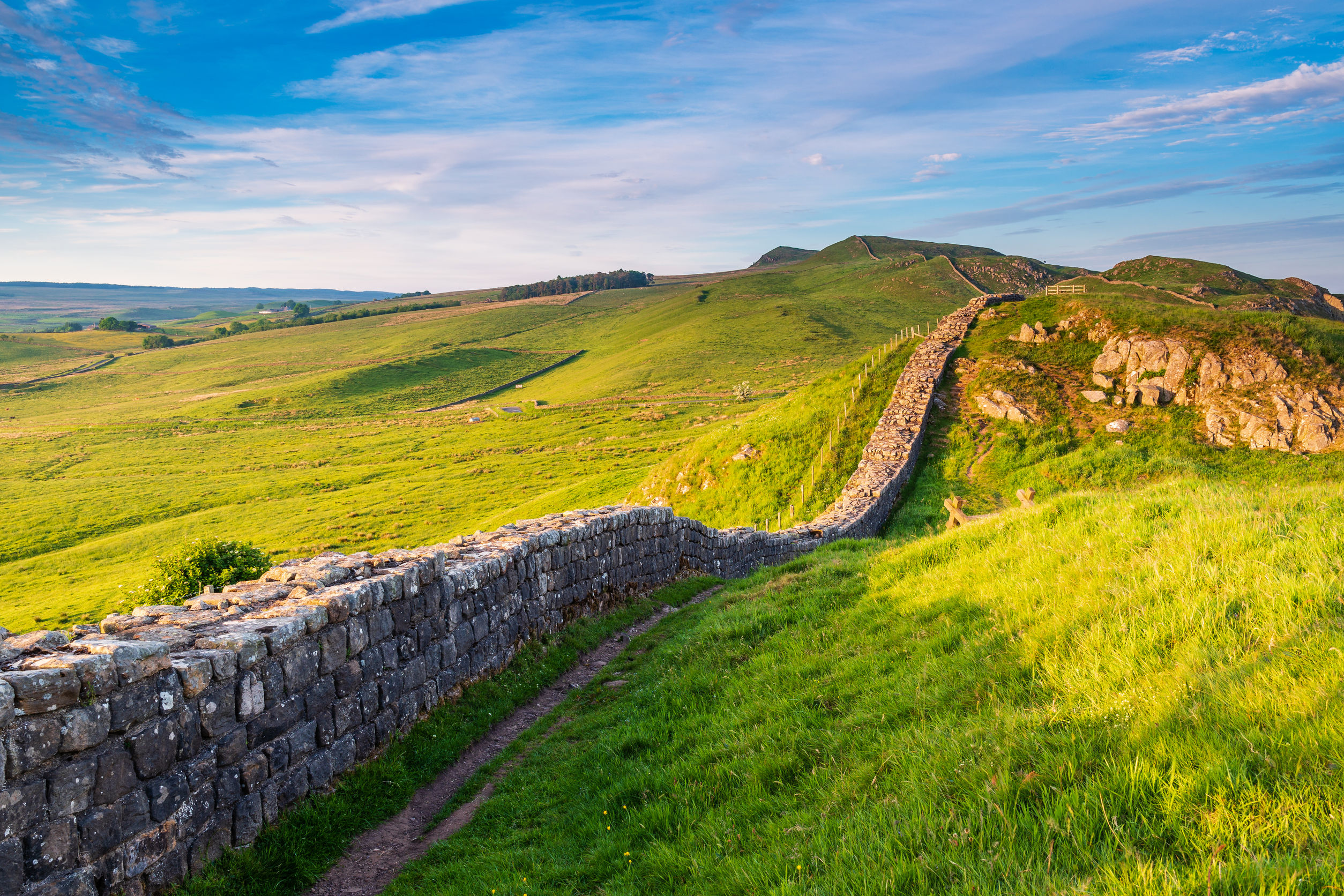 Most of the trail runs through remote countryside and small villages but there are sections that pass through the cities and suburbs of Newcastle and Carlisle. The section between Chollerford and Lanercost/Newtown is the highest and ‘wildest’ part of the path; it is also where the Wall is most visible, and includes several important Roman forts (Chesters, Housesteads, Vindolanda, Roman Army Museum, Birdoswald).

It’s no coincidence that artists, writers, royals and celebrities have made the pretty Cotswolds area of England their home. Dotted with honey-coloured towns and golden meadows, the Cotswolds is officially an Area of Outstanding Natural Beauty (AONB). The Cotswold Way trail allows you to experience the region on foot, starting in the market town of Chipping Campden in Gloucestershire all the way to the city of Bath in Somerset. It’s a relatively new National Trail that is very well waymarked so finding your way through quaint villages like Broadway, Stanton and Wotton-under-Edge won’t be a problem. You can expect to see historic sights on the walk and if you’re looking for a quintessentially British experience, the Cotswold Way is a hiking trail that perfectly embodies traditions like afternoon tea and a pint in an English country pub, all while taking in some of the most picturesque countryside that England has to offer. 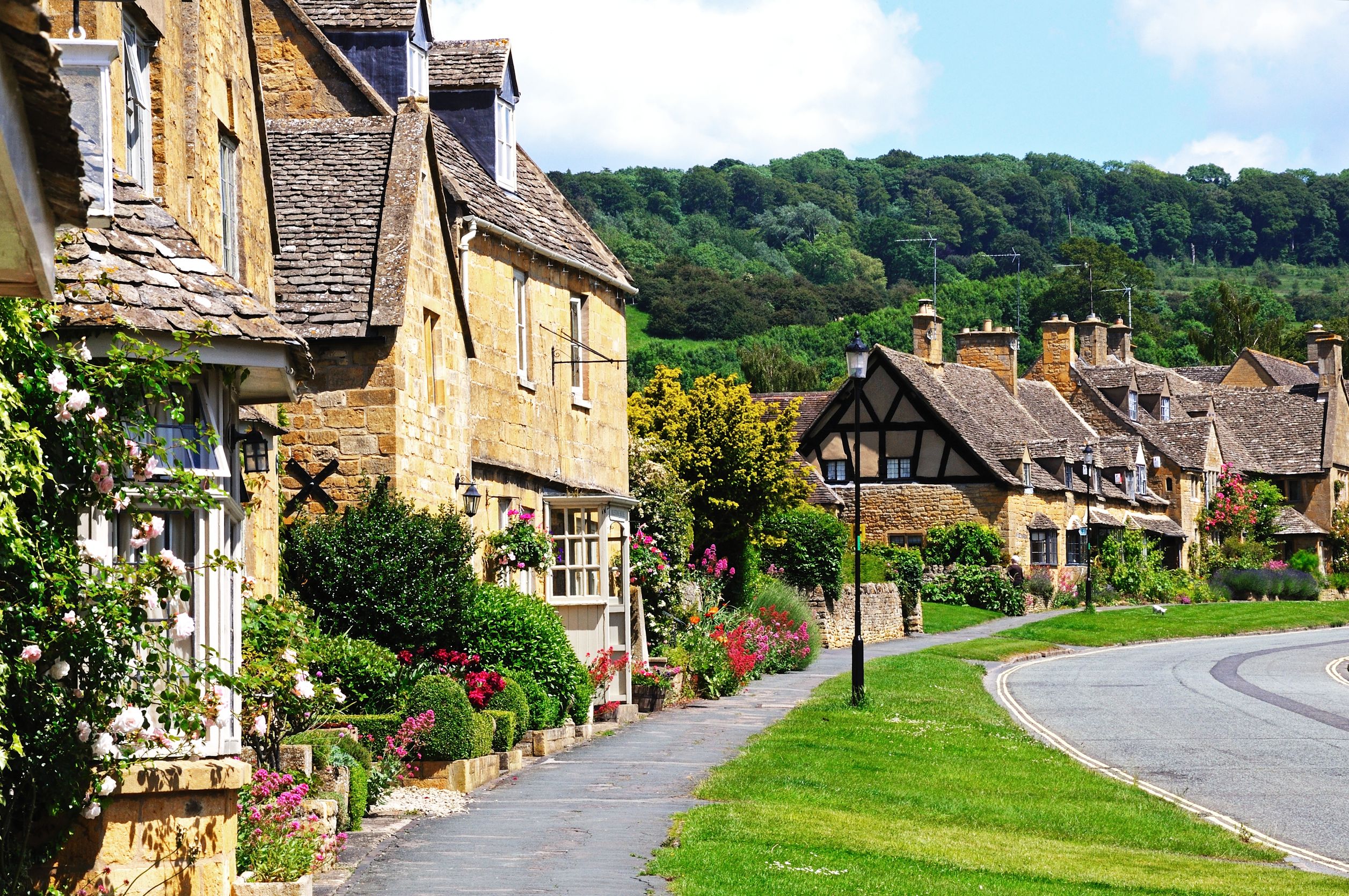 Anyone reasonably fit can walk the Cotswold Way. The rolling terrain, for the most part, is ideal for gentle rambles. Much of the walking is quite gentle and the trail mostly follows well-maintained paths and tracks along the Cotswold Edge, through woodland and meadows and over parkland and commons. Some sections can be muddy after periods of rain.

Want to give yourself the best chance of sunny dry days when hiking in England? The South West Coast Path meanders along the coasts of Devon and Cornwall, passing idyllic beaches, rocky headlands, ravines, waterfalls and towering cliffs. Regularly voted one of the best walks in Britain, it is on the more challenging side and elevation does reach considerable height. The stretch between St Ives and Pendeen is more rugged in particular but not beyond anybody with a reasonable level of fitness. The breathtaking scenery on the South West Coast Path is complemented by heritage, wildlife, geology and a brilliant selection of restaurants along the way – perfect for foodies! We recommend checking out Rick Stein’s world-famous seafood restaurant in Padstow, where the trail starts and trying the fudge ice-cream in the hilariously named Mousehole village near the end of the hike. 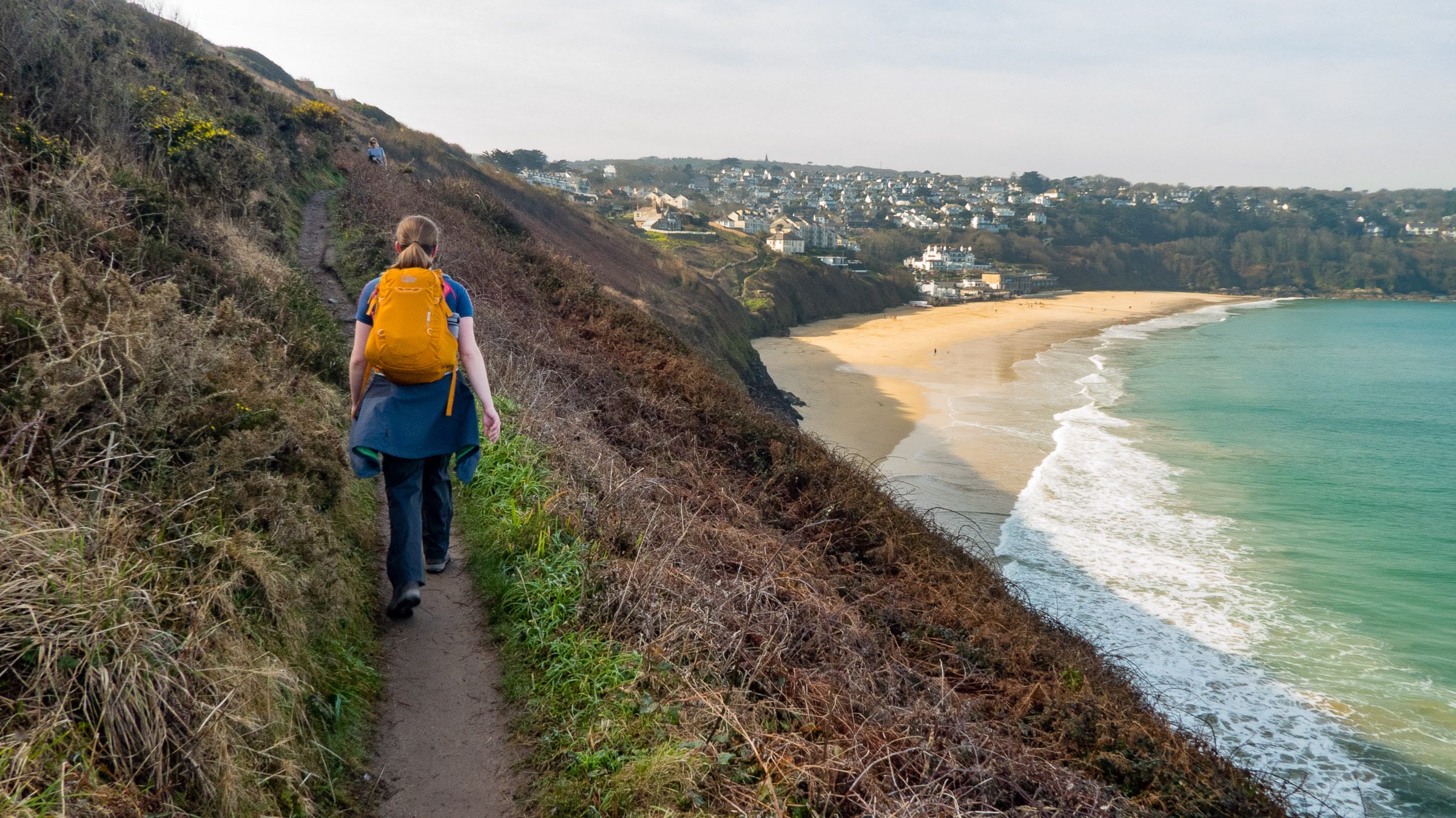 Ranked alongside some of the world’s best-known trails like New Zealand’s Milford Track, Chile’s Torres del Paine trek and Alaska’s Chilkoot Trail, the South West Coast Path is hard to look past when it comes to the best hiking trails in England. Far away from the hustle and bustle of the UK’s cities, it’s a trail where hikers come to experience solitude and peace but also one where friends can bond over a shared love of hiking, beaches, sunshine and great food.

Our next pick is a hilly trek that starts in the historic city of Winchester and finishes at the Victorian seaside town of Eastbourne. Located just 50 miles from London, making it a very accessible hiking trail, the South Downs Way lies within England’s newest national park of the same name. The chalky landscape gives way to spectacular views, wildflower meadows, beautiful old woodlands and charming villages. Beyond its natural beauty, it’s a route filled with history from the Stone- and Iron-age, through Roman and Saxon times, to the age of the Normans and beyond. Don’t be put off by the mention of hills, it’s actually one of Britain’s easiest walking trails despite the ‘up and down’ nature of the rolling valleys. 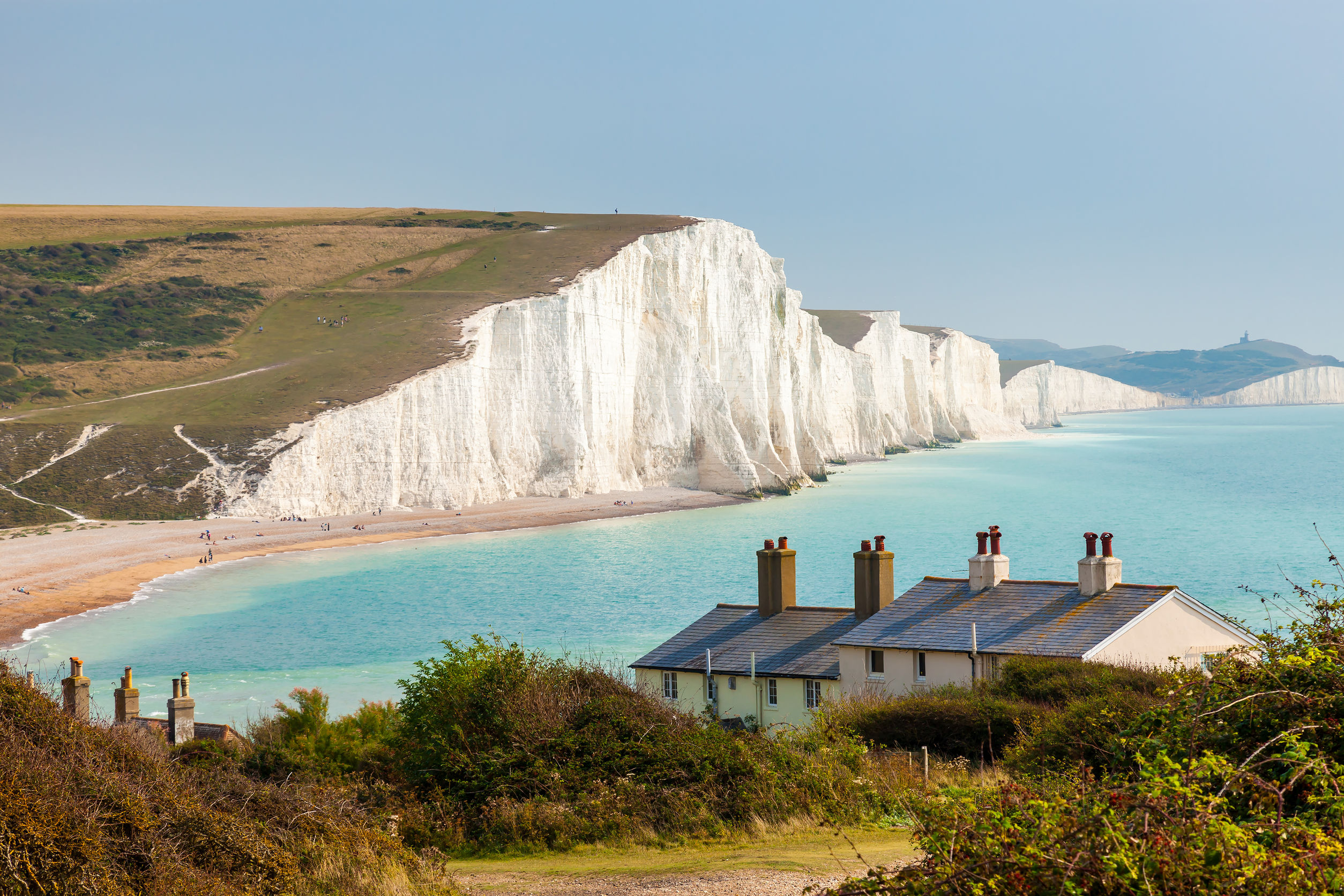 The highlight of the trail is undoubtedly the finale near Eastbourne where the trail rolls ahead to the backdrop of the stunning chalk cliffs known as the Seven Sisters. For almost the entire walk the trail follows good tracks, paths and open grassland, suitable for hiking. Watch out for cyclists, this is also a popular trail for mountain bikers.

Our final pick for the best hiking trails in England is a unique trail that also crosses over the border into Scotland. St Cuthbert’s Way links Melrose in the Scottish Borders with the spectacular Holy Island off the coast of Northumberland. Named after the religious figure of St Cuthbert, who started his life in Melrose before seeing out his final days on Holy Island, this walk is much more than a pilgrimage and offers hikers the chance to engage with history and culture on a scenic walking trail that crosses the River Tweed and then heads south towards the eastern tip of England. St Cuthbert’s Way can be completed in a relatively short time, around 6 days, and is a comfortable walk for anyone of average fitness. Like the South Downs Way, the best is saved until last on St Cuthbert’s Way with the trail crossing a coastal causeway to Holy Island and its dramatic castle and ruined abbey. 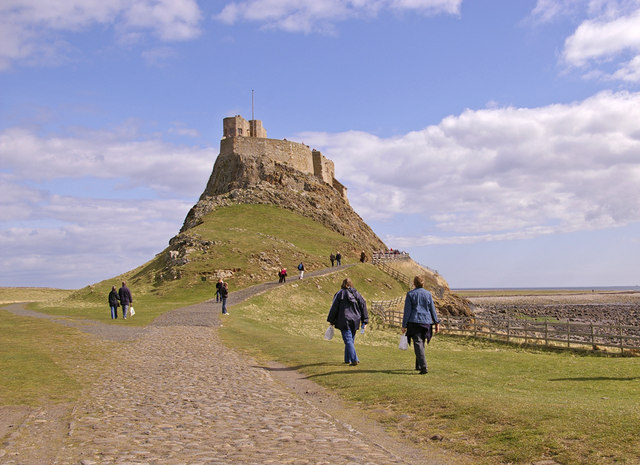