Feast your eyes and impress your friends with this ultimate list of St. Patrick’s Day facts! They’ll surely be all ears as the Guinness flows, the parade roars by and the leprechauns dance.

When did St. Patrick die? That’s the answer right there and it’s the reason we celebrate St. Patrick’s day on the 17th of March every year.

When was St. Patrick born? The exact date isn’t known, but it’s thought that Saint Patrick was born in the year 385 A.D.

Even though St. Patrick is the patron saint of Ireland, he was in fact born in Wales.

12. St. Patrick was kidnapped and taken as a slave.

This is how he came to Ireland in the first place – to tend cattle and sheep.

11. He escaped to England but eventually returned to Ireland to spread Christianity.

A case of Stockholm Syndrome, perhaps?

Saint Patrick was not born as Patrick – his real name was Maewyn Succat. He changed his name to Patrick upon becoming a priest.

9. St. Patrick used the shamrock to preach his teachings.

The shamrock is, along with the harp and Guinness, heavily associated with Ireland. This is because Saint Patrick used each leaf to represent each being of the Holy Trinity – the Father, the Son and the Holy Spirit. 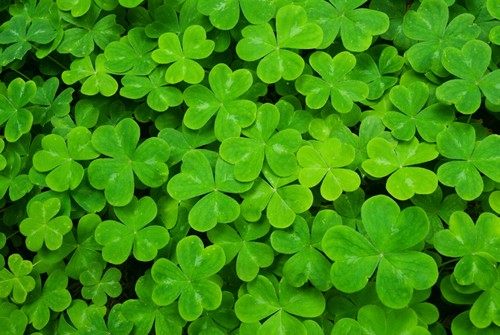 The shamrock – used by St. Patrick to preach

8. Dripsey, a village in County Cork, once ran a parade that lasted for just 77 feet.

This ‘parade’ conveniently started at one pub and ended at another.

Every year countries around the world light their famous buildings and monuments with a green glow to recognise Saint Patrick’s Day.

5. There were never any snakes in Ireland anyway.

St. Patrick allegedly banished all of the snakes from Ireland after they bothered him while he was fasting atop Croagh Patrick. Given that Ireland has always been far too cold for any sort of snake, it’s thought that these ‘snakes’ were merely metaphorical.

4. There are more Irish outside of Ireland than in Ireland.

There are an estimated 34 million people with Irish ancestors in America alone, while the population of Ireland is just 4.7 million.

3. The river in Chicago is dyed green every year.

Tonnes and tonnes of dye is dumped into the Chicago river to turn it green to commemorate the day that’s in it. The dye lasts for roughly 5 hours before dissipating completely. The Chicago River is turned green

2. Everyone should wear blue, not green.

Saint Patrick’s colour was actually blue, as was the national colour of Ireland.

Barack Obama enjoying a Guinness in a pub in Ireland

We hope that you enjoyed these St. Patrick’s Day Facts. Hillwalk Tours offers self-guided Ireland hiking holidays on the best trails at 3 different difficulty levels and between 4 days and 12 days in length.