Those who travel to Ireland, Scotland or England, will irrevocably become acquainted with the rich culture of Irish, Scottish or English folk music. To enjoy an authentic traditional music experience, we have brought you some recommendations of pubs which have a long-standing reputation of being the best places to go to be submersed in Irish music, traditional Scottish folk songs and English musical instruments.

Nowadays, artists can gain fame through YouTube, perform for an audience of tens of thousands, and replace instruments with laptops – the romantic idea of live traditional folk music in a cosy pub seems to be hard to find. Where will you still be able to enjoy the pure, raw sounds of English, Scottish and Irish folk songs? The British and Irish music culture still relies heavily on buskers and intimate pub performances. Instead of a dance, the music is mostly enjoyed along with a solid conversation over a pint of beer.

Traditional music lovers from all over the world flock to the United Kingdom and Ireland in search of that one pub that provides the most authentic experience. And the more one looks, the more one finds. Check out these six surprising local pubs where it’s all about Irish folk music, where you’ll meet Scottish musicians, and where you learn about English songs. And these are all conveniently also located along some of the best hiking trails in Ireland and the UK. 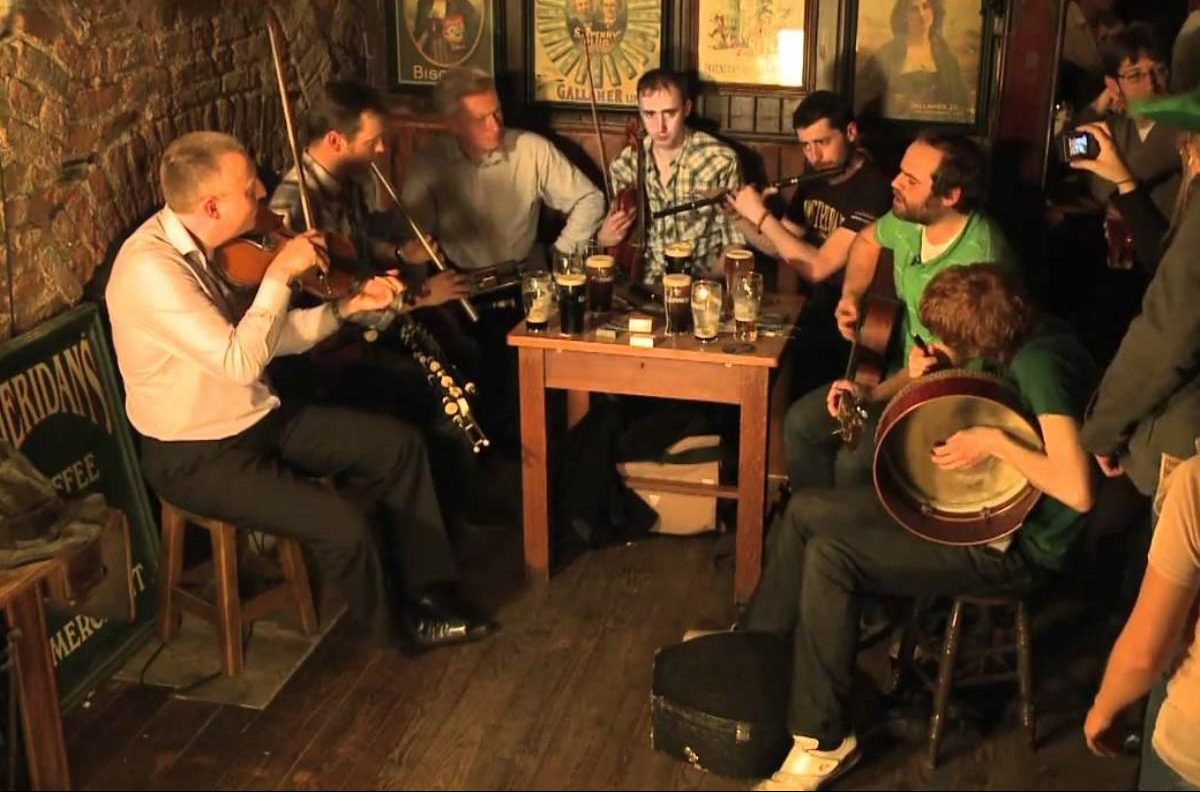 A warm fire, a plate full of haggis and the sounds of traditional Scottish songs played by accordion, violin, guitar or flute – can it get any more authentic than that? Every weekend Scottish musicians play a mix of Scottish folk music, old classic’s and their own songs. The cosy feel and decent meals make McKays an ideal place to be intimately introduced to the Scottish village feeling.

Take a look at our Rob Roy Tours where you can stop in Pitlochry and experience McKays Bar & Restaurant.

You might be greeted by some weird looks when you enter this place. The modestly sized pub always seems to be filled with more (slightly distrusting) locals than tourists. However, once inside you will be treated with an authentic musical experience. Every night a group of Irish musicians will pop up out of nowhere in a corner of the bar and bring the place to live with an exhilarating dose of your typical traditional Irish folk music. And when you’re done here, it’s only a five-minute walk to endless locations to enjoy different types of live music, from pop covers to talented buskers on the streets.

If walking our West of Ireland/Connemara or Burren Way Tours, then why not take an extra night in Galway and visit Tig Coili’s!

The English coastal city of Newcastle is mainly famous for the wild party scene, including DJ’s and pop artists. Those who look beyond the bustling city centre, will find themselves in a world of traditional English folk songs and micro breweries. The Cumberland Arms offers the best of both: a wide range of hand brewed beers and English musicians that bring out that ultimate pub feeling.

Check out our Hadrian’s Wall Path Tours if you want to experience the Cumberland Arms in Newcastle.

For Scottish musicians it has always been about simplicity: start as a street performer and slowly work your way up to the top. Visitors would probably not expect that a dreamworld of traditional Scottish music lies behind the simple facade of this Scottish pub. Don’t expect to find a seat in this always busy pub – the spontaneous Scottish music and relaxed atmosphere will make you happy to stand for a while. Travel back in time for a nostalgic night of acoustic Scottish folk songs.

Edinburgh is a perfect starting point for a Scottish Walking Tour.

These two adjoining pubs in Northern Ireland offer a varied musical menu. Fans of traditional Irish music can go to Peadar O’Donnell’s to listen to typical Irish folk songs. For those who are more into contemporary music, they can visit The Gweedore for concerts of international and Irish musicians. A combination of the two might even be better: a rousing show in the pop and rock Walhalla, followed by long conversations over a pint between the locals in Peadar O’Donnell’s.

Take an Antrim Tour to experience the beautiful Antrim Glens and Coastline.

This village on the west coast of Ireland is known for its musical and cultural value. And let’s be fair: where better to enjoy traditional Irish music than in a charming fishing town with its picturesque harbour, creative craft shop’s and quaint streets? O’Sullivan’s is hard to beat when it comes to a relaxing atmosphere and cosy concerts offering traditional Irish music sessions. In addition, to emphasise this musical status, the facade of the pub is decorated with a guitar.

Take a look at our Dingle Way Hiking Holidays, where you can visit O’Sullivan’s Courthouse Pub, on your stopover in Dingle.

We hope that you enjoyed this guide to Popular Pubs For Traditional Irish, Scottish and English Music. You can visit all of these pubs on our range of Ireland, Scotland and England hiking tours.